‘Jeremy has been eternally positive but also kept her focused throughout the session. She finds English hard and he has inspired her to do her best and her confidence has improved significantly. I cannot recommend him highly enough’

I have been working as a professional tutor since 2015. I am a graduate in Classics from the University of Oxford. My subject specialisms include English, Latin and Greek. Additionally, I am able to tutor Maths, Science, French, History and Philosophy as well as preparation for the Entrance Exams. I have worked with over 50 students at many different academic levels studying with a wide range of exam boards.

I relish the personal approach which tutoring affords, and have found watching tutees achieve well in school and personally an utter joy. I experienced first-hand the benefits of the system of personal tuition in place, and wholeheartedly believe that it should be available to students throughout their early education and into A-Levels.  Tutors when at their best are exciting, engaged, considerate and passionate individuals who help enthuse their student with verve for their studies.

I have helped students to secure places at competitive London day schools such as Westminster for Year 9 entry and established boarding schools such as St. Mary’s Ascot and Wellington. Please see below for some examples of my recent tuition.

I work with several students on a weekly basis providing support with reading and numeracy, in age ranges from 7 to 11 years old. I am currently working with a family for the fourth year, guiding their 12-year-old son’s progress through the junior school curriculum, providing extra support in Maths, English and occasionally French. I relish the opportunity to work with students at this level for extended periods of time, as it allows progress to be carefully monitored and the best results to be ensured.

Entrance examination tuition forms the cornerstone of much tutoring work. It remains a vital concern for parents and it has been a pleasure to help many families achieve entry into their desired schools. One particular case study is that of Rocco, who was struggling with entrance examination pretests, for one hour-long session a week. I was requested to help advise the family on the best school to suit their son, as well as preparing him for the examinations he had to take. He tested for the most competitive North London schools. While the family did not achieve their first choice, I felt proud to help in advising them on alternatives and they eventually chose a secondary school much better suited to their child’s needs. While I have tutored many children who have successfully gained entry to Westminster, St Paul’s Girls’ and Boys’ School, Highgate and many others, this is a placement which I was particularly proud of; it was important to help the family understand their options and offer them alternatives which they may not have previously considered.

Rocco Soning – 11+. I had the pleasure of tutoring Rocco for two years through his Highgate pre-tests and UCS entrance process. The focus was on making him stand out from the candidates while also ensuring his grades and attitude towards the daunting task of examinations was first-class. The placement lasted for two years and I am pleased to say that he was eventually awarded a place at Highgate to start at Year 7.

13+ Westminster. I was tasked with teaching Tom, a scholarship candidate in order to prepare him for the grueling process of examination which that demanded. We focused especially on Maths and Latin, as those were the areas which we felt required the most amount of attention. This demanded a fresh and innovative approach, anticipating the high-level questions which are asked of applicants. We worked on developing problem-solving abilities both within the subjects and in the every day approach to work. Tom was a truly fantastic student, and he was awarded an academic scholarship for entrance at 13+.

13+ Winchester. Alexei was an excellent student, who just needed gentle encouragement and work in the run up to his exams. We worked together for an hour a week and he was successfully offered a place at Winchester and City of London, where he ended up attending.

13+ Entrance, Bedales – Arlo Martin. Arlo was one of my longest-standing clients until his entry to Bedales at the start of this academic year. We conducted our lessons via Skype, as his family lived in Sri Lanka, working for the Department for International Development. These lessons were conducted face-to-face during holidays, when Arlo was in England. The difference in academic demands between the international school system and the English private system is substantial, and most of our time was spent making up for gaps in knowledge and then preparing Arlo for the interview/examination process which he was entirely unfamiliar with. He achieved entrance to the school, much to our delight. I continue to maintain contact with the family and underpin his schoolwork as and when required.

Tutoring for Common Entrance and 13+ examinations

All of my students gained entry to their first choice schools last year, which were St. Mary’s Ascot, St. Paul’s Boy’s School, Westminster and Wellington College. We worked intensely on exam technique, with an emphasis on meeting expectations in both the quality and proficiency of the work required under timed conditions.

For the past three and a half years, I have been working with a London based international family’s son, Adam, helping underpin his week-to-week learning and providing specific assistance in the run-up to entrance examinations and end-of-year assessments. These sessions are provided for one and a half hours every week. During this time, we have seen Adam go from strength to strength, gaining entry to St Paul’s Boys School at Year 9 last year and progressing from a place in the middle of his peers academically speaking to regularly receiving commendations for his work. At entry, he was place in the top sets for Maths and English.

It has proved to be a fruitful and enjoyable experience. The ability to form close ties with a family and work towards a goal they have for their children is one of the most important aspects of one-to-one tuition.

I was recently engaged on a residential placement in Chobham for the second half of this academic year. The student is preparing both for her French GCSEs, and requires intensive language classes for the two weeks of her holiday. I have devised a system of lessons which integrate current affairs in the French news with language learning, including pronunciation and accent classes, essay writing technique, and standard conversation and discussion of the issues. The focus is on developing a complete understanding of the language at her level to provide a foundation as a support for her upcoming examinations.

Latin, Ancient Greek and English Literature – GCSE. I supervised a student at Wycombe Abbey School for her GCSEs. We worked slowly on developing a measured approach to study, making sure to arrange information and underpin learning with fantastic organisational skills. In English Literature, the main task we undertook was understanding how to interpret and analyse language, especially in those sections of examinations which require analysis of an unseen poem. In Classics, she was a fantastically able student, but needed confidence in class and a nuanced means of expression in translation in order for her to achieve the highest possible grades. Her ultimate aim was to study Classics at Oxford, and I was delighted to have the chance to advise the family on her best options, using the benefit of my personal experience.

I was given the opportunity to devise and teach and full-time academic schedule for two brothers, Sinawe and Mazwe, at 13+ and GCSE level over two residential placements in Barbados and then South Africa. The family had to split their time between business and family commitments in the two countries. For this reason, the children were required to at times be absent from school. The task was both to maintain the levels of GCSE and Key Stage 3 education from school, and to ensure progression in terms of academic achievement over the six weeks’ total. The days were 6 hours long, split into three two-hour blocks.

The GCSE syllabus was mainly OCR and AQA, and course materials were a mixture of those provided by the school and expanded learning resources of my own creation. This ensured that there the lessons were kept fresh and exciting, while guaranteeing that they remained relevant.

I provided help to a young French student, Jean, looking to integrate into the English education system and culture as he prepared to change school for sixth form. The two hour lessons were split into two blocks. The first focused on developing his thinking and discursive conversation by presenting him weekly with a philosophy problem, which we would then discuss and pick apart. The second was embedding him in English history by choosing topics from a selection of my own making, and discussing them, including guiding some basic research on the facts before forming opinions. This was therefore not subject-specific, but rather an enrichment placement to help develop critical thinking skills. I was delighted with the progress Jean made, and the pinnacle of this was receiving a note after entrance-interviews commending him on his performance and his responses.

I provided, first through Skype and then in two-hour long face to face sessions weekly, tuition for A-Level Ancient Greek and Latin. Alexander wanted to apply for Literae Humaniores (Classics) at Oxford. Having studied there myself, I enjoyed very much using the benefit of my knowledge to help the application prove successful. Alexander had little knowledge of the system, and low confidence when it came to interrogating his answers to longer analytical questions. With time, he became a much more considered, confidant thinker who I am pleased to say was offered a place at Magdalen College to read the subject. It was a subject of great pride for him and his family.

Thesis Supervision – Graphic Design. I was asked to consult with a student on an undergraduate thesis in an area that was far-removed from my own area of expertise. The focus of the placement was on essay-structuring and technique, quality of expression and concision. The student was eventually awarded a first class for the thesis, having been predicted a 2:2 after the first draft.

KS2 Homeschooling – Constance. I am currently working with a child, teaching her KS2 Geography and History twice a week at her family home. We have to combine enrichment of curriculum subjects with our own projects to keep the syllabus fresh and exciting. Constance struggles with dyslexia, and the school which she is entering next year employs the international curriculum, whose values reflect what we study in lessons. I have been delighted to see her progress so far, and hope that she will continue to flourish under my supervision for the remainder of the academic year.

I also am passionate about other culture. I speak French and Spanish, am a huge fan of both of those countries’ cultures, and am always eager to experience other cultures where possible.

My main interests are in the creative arts; especially drama and writing. I am a professional actor, touring Shakespeare to Japan and performing in theatres all over England, as well as filming series for the BBC and ITV. I have been awarded a university prize in short fiction twice over, once for some work written while a visiting student at Sarah Lawrence College, New York. This does mean too that I have taught creative writing to an adult learner and public speaking and interview skills!

I hope to use both creativity and experience of performance to make teaching an engaging and exciting experience for my pupils.

‘Jeremy has been eternally positive but also kept her focused throughout the session. She finds English hard and he has inspired her to do her best and her confidence has improved significantly. I cannot recommend him highly enough’ 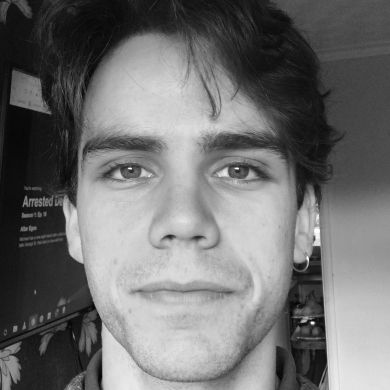