Our Review of Winchester College

Winchester College is an independent boarding school for boys in Hampshire. In this article, one of our education consultants recounts their visit to this impressive school. If you are interested in sending your son to Winchester College or are struggling to find the right school for your child, please contact one of our education consultants or use the online enquiry form further down this page.

Winchester is clear about the kind of boy it is looking for. Ideally, they would be passionate about learning, happy and confident in themselves and able to cope with a demanding curriculum. They must also be prepared to contribute in other ways to the cultural, sporting and social life of the school. Sport and music are excellent while other areas such as DT, Drama and Art are perfectly well catered for but there is no, ‘cool factor’ attributed to them. In this way, Winchester may provide a more welcoming environment for boys who would perhaps be considered, ‘bookish’ at some other schools. As a result of this selection policy – and of course first class teaching (the true credit probably lies somewhere in between) the school has fantastic academic results. Almost all boys leave Winchester to go to good universities in the United Kingdom, and some go to universities in the United States of America or continental Europe. Every year a substantial number, about a third of the year group, go on to Oxford or Cambridge.

Winchester is a boys only school of about 690, all of whom board full time. The boys live in ten boarding Houses, all within easy walking distance of the mediaeval College, its classrooms and its facilities. Each House is a self-contained community to which the boys return from classes or games to study, eat and sleep. Each of the Commoner Houses has approximately sixty boys in residence.

Each House is like a family and selection for a particular house is managed directly between the House Master and parents. The scholars (for whom the school was originally founded) live together but are taught with all the other boys and are generally credited with raising academic standards amongst their peers. The dons (teachers) seem to have taken an almost monastic commitment to a ‘life of learning’. They were all smartly presented and not at all stuffy and were on friendly terms with the boys. I liked the fact that they ate alongside them at lunch and obviously enjoyed mental sparring with them.

Winchester is a good looking city and the College buildings and grounds must be some of the most beautiful of any school in the world. The library, houses and other facilities provide a feeling of intellectual sanctuary which the boys told me inspire, ‘great thoughts’. The school is close to London (1 hour) but feels worlds away. It is a real boarding school – with plenty of activities to keep the boys occupied during the weekend. They can go home on Sundays, although most choose not to.

I had lunch with several Lower Sixth boys, all of whom are taking the Pre U (IGCSE’s are taken before this). They were intimidatingly smart – giving me thoughtful answers to questions about current affairs. The group seemed like a fairly typical make up – one boy was from Hong Kong (and, ‘will probably go back’), two were from London prep schools and one was from the local Pilgrims Prep school. They were all extremely polite, testament to the school motto, ‘Manners maketh the man’ and had a sense of humour; ‘I like it here because we’re under the radar – no one has heard of us and we’re never in the newspapers – not like if you go to Eton where everyone thinks you are posh.’

While the School enjoys an enviable reputation in public examination performance, its overriding objective is to offer a broadly intellectual, well-rounded education.

Div is the hallmark of a Winchester education. Every boy meets in his Division for one period every day. His Div Don (teacher) therefore sees more of him than any other of his teachers, and it is the Div Don who takes him through courses which are designed to foster in him a love and respect for learning for its own sake. Thus for junior boys History and English Literature are not offered for GCSE but form the basis of a general unexamined programme pursued through Div. In the First Year the Div Don teaches all aspects but in the Second Year Div is taught by English specialists, and in the Third Year by Historians.

In Sixth Book (Sixth Form), Div can lead almost anywhere, according to the interests of the boys in the group and the Div Don himself, covering an extremely wide range of history and literature. Opportunities to deepen aspects of the broad knowledge he acquires through Div are afforded through the Task Time, when under the supervision of his Div Don, he will write regular essays based on private interest and research. He will often be asked to offer a presentation to his Div.

To learn more about Winchester College or to find a school perfectly suited to your child, please call one of our education consultants today. 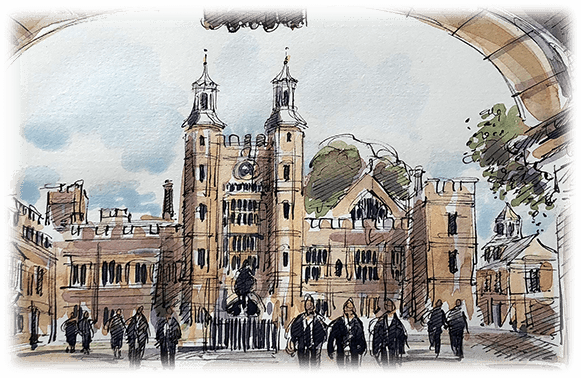